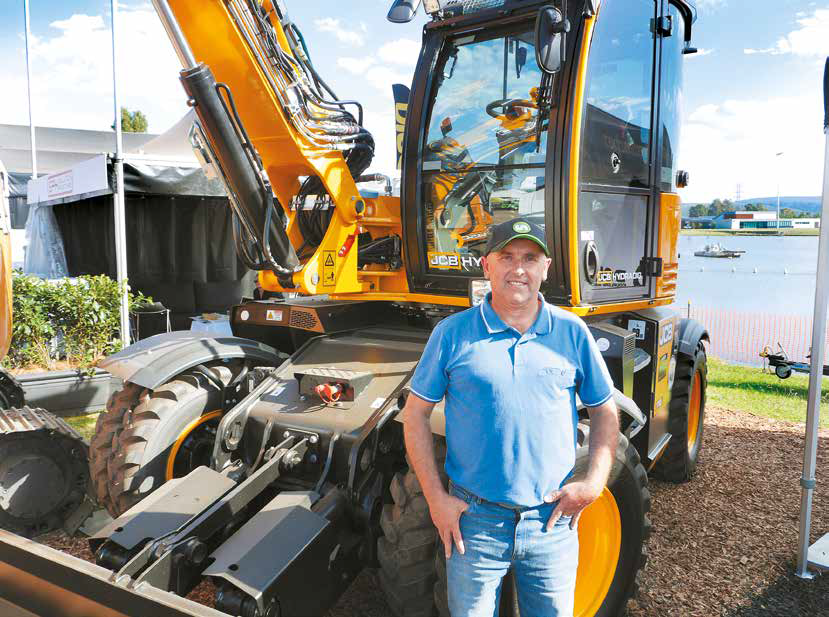 When some people take a new direction in their lives, often, they travel or take up a new hobby, but there are some, who deviate even further, throwing their lot into some long-considered idea.
This is the decision I think Pryde Inglis came to not long after he decided to take a new direction with his life. It was just a few days before he was about to put the culmination of all that thinking into action when I caught up with him on the Doherty Attachments stand at the Diesel Dirt & Turf show in Penrith recently.

Pryde’s idea is a pretty good one and certainly novel. Essentially, he has fitted a Doherty Attachments supplied Steelwrist tilt-rotator, complete with Steelwrist gripper (pincer-grab) to a JCB W110 Hydradig. “I had this idea floating around in my head for a while and it was time to put it into action,” he says.

While this may look somewhat interesting at first glance, it gets even better as Pryde will soon be fitting a hydraulic chainsaw attachment to the machine, which will give it harvesting capabilities, all with 360 degrees of rotation and tilt. With this first-of-its-kind marriage of machinery for specialised purpose in this part of the world, the new owner intends to service local authorities, councils, and utility companies, carrying out maintenance work initially in the Gippsland region of Victoria.

Sure, it’s not designed to hit the forest and deal with plantations of trees on a regular basis, but it could be a serious contender for taking care of downed trees after storms or just regular maintenance work.

“I’ve also had the joysticks converted to Steelwrist versions and will also be able to control the steering with them,” he says.

Coupled to the agile arm of the JCB W110 and its ability to travel to a job without the need for a large entourage gives the machine some extra pluses, and with Pryde being able to tackle certain types of work in a fraction of the time that it currently takes with a manual crew, the company accountants should be suitably impressed.

But to take the idea even further along the road so to speak, Pryde intends to tow a five-tonne tipping trailer behind. “I’ve been also looking around for a chipper to tow when I don’t need the tipping trailer,” he says.

“The problem is I haven’t found a chipper that is set up to feed from the side yet.”

Thinking about it, I can’t recall seeing a towable chipper that is set up to feed from the side as will be needed if Pryde intends to cut a branch with his chainsaw attachment, slew around, and feed it through a side-fed chipper, expelling the mulch out onto the berm.

Once he adapts a chipper or a business gets on-board and makes one, I think Pryde will have the near-perfect machine for his intended purpose, and it will be an innovative assembly of machinery, all capable of being operated by a crew of one.

I’m pretty sure it’s unique. I haven’t seen anything like it Down Under but I could stand corrected. There are machines that carry out similar work, but I don’t know of anything that takes care of the entire tree branch removal/ mulch production process in one operation.

Well, nothing that doesn’t involve people carrying out manual labour.

Convincing me about the machine and its intended use was easy, especially when it’s quite rare to see any degree of innovation in the machine industry these days, but convince me he did and it appears he also has the ear of a number of others.

“Construction Equipment Australia (Australian JCB distributor) likes what I’ve come up with and there is talk about me taking it on a roadshow to demonstrate the machine’s capabilities,” Pryde says.

Pryde also points out that some authorities have already expressed interest in what the machine can do, and no doubt his idea has solidified some long-held thoughts around dealing with roadside vegetation.

“I certainly hope that they understand what I’ve tried to achieve by marrying up all this gear into one purpose-built package. All indications point in that direction, so I’m excited to see where all this goes,” Pryde says.

Having just a few days earlier experienced a severe storm over a couple of days in Auckland, I can attest to the requirements for machinery such as what Pryde is about to put to work, especially during storm events that seem to be more commonplace these days.

Pryde’s machine would make short work of reinstating access on roads closed by fallen trees and providing a safe quick option to how we currently deal with roadside vegetation issues.
So I’m also excited to see where things go with Pryde and his innovative idea, for we had ink, plastic tubes, ball bearings and springs before the ballpoint pen.
For more information about Steelwrist tilt/rotators, visit doherty.co.nz.

For more information on excavators please contact your local dealer on 1300 522 232.