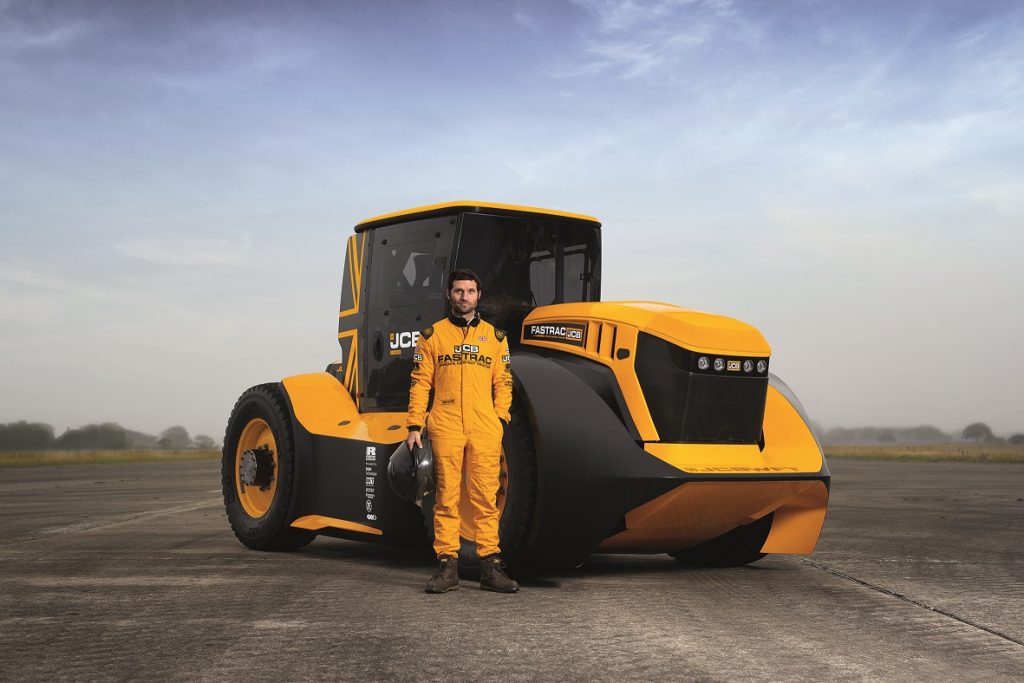 JCB’s Fastrac has stormed into the record books after being crowned the world’s fastest tractor with a speed of 217.57 kph (135.191 mph).

The Fastrac – designed and built by a team of young engineers in Staffordshire – secured the title at Elvington Airfield in York with motorbike racer and lorry mechanic Guy Martin at the wheel.  The feat was officially ratified by Guinness World Records who presented the company with a special framed certificate minutes after the achievement.

The astonishing story of the tractor’s development and assault on the record was told in a TV documentary on Channel 4 last night (Nov 17) called ‘The World’s Fastest Tractor.’

The achievement comes after JCB set its first Guinness World Record for the fastest tractor at Elvington in June. Called Fastrac One, it reached a speed of 166.7kph (103.6 mph) with Guy Martin in the driver’s seat.

JCB then embarked on an ambitious plan to break its own record and developed Fastrac Two – which was 10% lighter and was even more streamlined than its smaller brother.  Fastrac Two hit an astonishing peak speed of 247.47kph (153.771mph) on its way to recording an average of 217.57 kph (135.191mph) at Elvington. Both tractors are based on a standard, commercially available JCB Fastrac, which is sold around the world.

Guy Martin said: “This has been a massive undertaking, and I was a very small cog in the machine. It was a proper privilege to be involved, so thank you very much to JCB and its engineering team, who got this tractor absolutely spot-on. Just look at it, they get stuff done, it’s brilliant, and it is still a working tractor, so could have gone straight into the nearest field to put in a shift.”

A team of JCB engineers has been working on the project to further develop the tractor over the last few months and today JCB Chairman Lord Bamford praised their “amazing achievement.”

He said: “When we reached 166.7kph (103.6 mph) with the Fastrac in the summer, I was convinced we could go even faster, and the JCB team has risen to the challenge by setting this new record. It’s an amazing achievement delivered by a young and enthusiastic engineering team. Everyone involved should be very proud of the part they have played in showing off British engineering at its very best.”

The record-breaking attempt was overseen by Guinness World Records, who confirmed that the JCB Fastrac completed two runs, in either direction through a speed trap set 1km apart, within the allotted time, to set the 217.57 kph (135.191mph) record.

Getting Fastrac Two on to the Elvington aerodrome in just a matter of months has been a tall order, but one that project manager Alex Skittery and his team of young engineers have grabbed with both hands.

JCB Chief Innovation and Growth Officer Tim Burnhope said: “Fastrac One really proved to us that there are no limits to what a young and dynamic engineering team can achieve. So we pushed boundaries and ideas, and looked at all aspects of the project to find solutions and make improvements. The biggest challenges have included aerodynamics, reducing weight and improving performance – getting a five-tonne tractor to safely reach 241.402kph (150mph), and stop again, is not an easy task, but we’re all so proud to have not only reached these goals, but to have exceeded them.”

To secure the World’s fastest tractor record, JCB’s engineering team returned to the drawing board to produce the vastly-improved Fastrac Two. Powered by JCB’s 7.2 litre, 6-cylinder Dieselmax engine produced at JCB Power Systems factory in Derbyshire, peak power was measured at 1,016hp backed up by over 2,500Nm of torque.

Despite the tractor developing 1,016hp, it achieved over 5mpg and needed only a tiny 20-litre fuel tank to make its high-speed runs. And while it has the capability to run on vegetable oil, a special formulation of high-performance racing diesel was used.

Aiming for a target speed of 241.402kph (150mph) required Fastrac Two to shed even more weight. It is 10% lighter than Fastrac One, while benefitting from greater strength and additional streamlining. With the help of key industry partners, the JCB engineering team delivered a tractor capable of setting a new World record for the fastest tractor (modified), for which Guy Martin is undeniably proud to have been holding the steering wheel.

It was Lord Bamford’s idea to develop a tractor which had a high road speed capable of field work, and the World speed record now achieved came 28 years since the first production model rolled off the line.

JCB is no stranger to land speed records. In 2006, its Dieselmax streamliner set a new diesel land speed record when it reached 563.42kph (350.092mph) on Bonneville Salt Flats in the USA, using two JCB Dieselmax engines. It’s a record that still stands to this day.

For more information on Fastrac tractors please contact your local dealer on 1300 522 232.