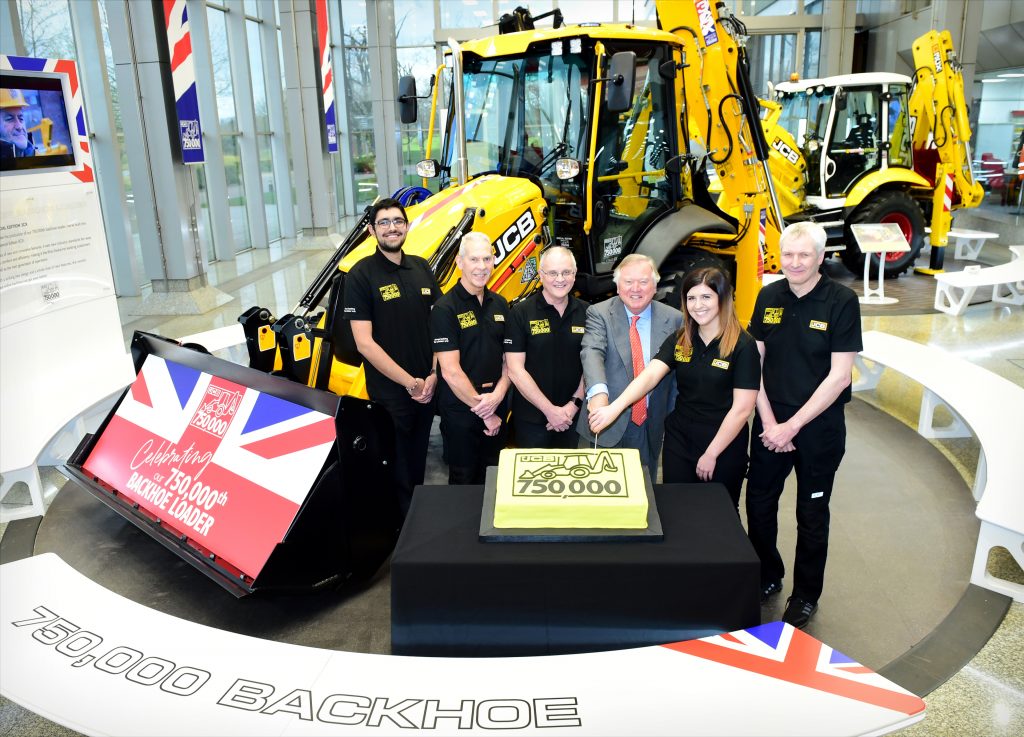 JCB today celebrated a unique milestone as its 750,000th backhoe loader rolled off the production line.

The landmark machine was driven off the line at the company’s factory in Rocester, Staffordshire – the very location where the first JCB backhoe was manufactured almost 70 years ago.

It was in 1953 that company founder, the late Joseph Cyril Bamford CBE, conceived the idea of the JCB backhoe loader, which created, for the first time, a single machine which combined a front shovel and rear excavator arm. In its first full year of production in 1954, just 35 of the machines were produced and it took more than 20 years for the first 50,000 to be made.  JCB now manufactures backhoe loaders in the UK, India, Brazil and the USA.

JCB Chairman Lord Bamford said today: “Some of my earliest childhood memories are of watching our first backhoe loaders being produced at Rocester and it’s incredible to think we have now manufactured 750,000.

“What’s even more incredible is that the backhoe remains one of the world’s most popular pieces of construction equipment almost seven decades after the first was produced. It really is testament to the versatility of the machine that its popularity continues to endure and will see it continue to prosper in the future.”

The 750,000th model is a Special Edition of JCB’s latest 3CX backhoe loader, bearing a unique livery and comprehensive specification.

When Phil Starbuck, 60, of Foxt, near Leek, Staffordshire joined JCB in 1975 as an apprentice straight from school, JCB had made just over 50,000 backhoe loaders. Today as Phil – the longest serving employee in the backhoe loader business unit – joined in the celebrations for the production of the 750,000th model, he reflected on his contribution to the success story.

The JCB Backhoe Group Leader said: “I am very proud to be a part of this special production milestone. It is a marvellous achievement and to be part of it is fantastic.”

Despite its maturity, the backhoe loader remains hugely popular in terms of global construction equipment sales – even though new and competitive products have evolved over the past 67 years. And JCB’s iconic backhoe is the biggest selling in the world – and has been for 19 consecutive years.

The company’s first backhoe was the JCB Mark I and the concept quite literally went on to change the shape of the world, mechanising many jobs, which had previously been done by hand. The product developed rapidly, with the launch of the Hyddra-Digga in 1956. Both these early machines came in blue and red livery and it was only in 1960, with the launch of the heavier, more powerful JCB 4, that JCB’s signature yellow branding made its first appearance.

It was 1980 which proved to be a real turning point with the £24 million investment in the launch of the technologically advanced JCB 3CX – a machine which has become a backhoe icon around the world. It was the launch of this machine which was the real catalyst for growth of backhoe sales and for JCB.

Fast forward to today and the current generation of backhoe loaders feature automatic deployment of stabilisers on unlevel ground, a Smooth Ride System which cushions the loader and improves load retention when travelling and a TorqueLock feature which reduces on-road fuel consumption by up to 25%.

Royalty, Prime Ministers, politicians and TV stars have all been photographed in the cabs of JCB backhoes over the years. The JCB backhoe was even the subject of a song which made the top of the charts. And it was a JCB backhoe which thieves used in a failed attempt to steal £350 million worth of diamonds from the Millennium Dome in 2000.

The latest backhoe production milestone comes after JCB celebrated  the manufacture of its 500,000th backhoe in December 2012 – a 5CX, the most powerful commercially available backhoe JCB has ever made.